Since the nature | location of the site area is critical and full of potential, the positioning of the intervention has to be strategic, and so its conformation | scale too. Speaking in practical terms, the need for a huge volume has come in order to compete –in a referential and collaborative way- with the heavy mass of the old Customs building that dominates the square of Port Vell. But in this case, a huge volume has to be as much lighter as possible, possibly lifted from the ground, in order to not limit the original flow of the place and the views between the harbor and the city. Barcelona owns a character that tends to prefer a free flow instead of limited and defined spaces, and so the majority of its buildings are lifted from the soil, suspended by brave protrusions or aerial structure: a way so extravagant as it is clever to dominate the space! The big volume wants to follow this concept. 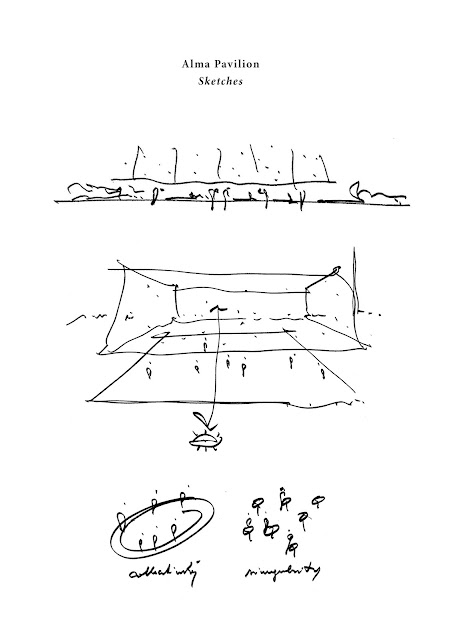 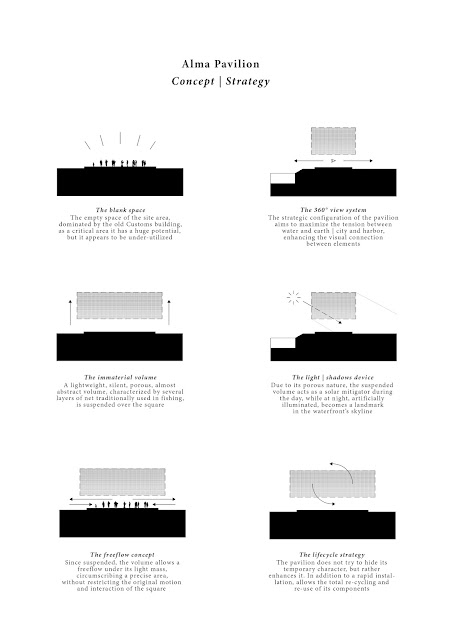 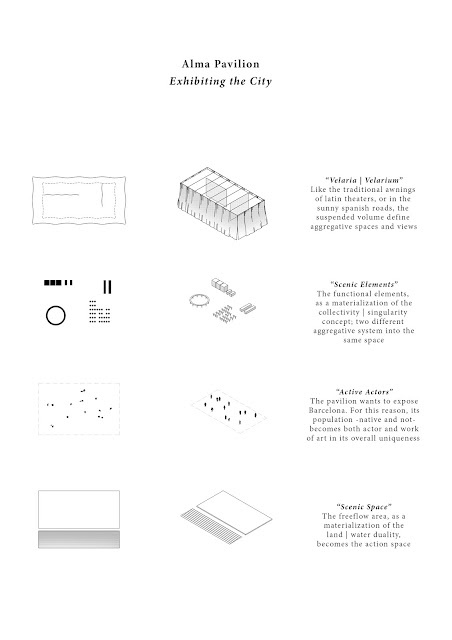 The fact that is made of several layers of fishing net is both typological –for the area, the traditional, ancient port with fishing activities- and aesthetical | conceptual. Like a fishing net can capture fishes in the sea, this great net is here to catch people from all over the city; to bring the light of the Spanish sun and making it pleasant. The structure that supports this almost precarious element is visibly temporary, self-standing and made of stainless steel. It consists in a group of four steel pole and an internal frame of steel cables –used for tension structures- attached to the ground by a bolted steel plate, while the cables are beringed to the soil by tie rods. At the same time the structure acts as a sort of, again, typological character for this precise location. It reminds the highnesses of the masts
of sailing boats in the nearest Marina of Port Vell. And, of course, it also recalls the trees that are located in the site area. 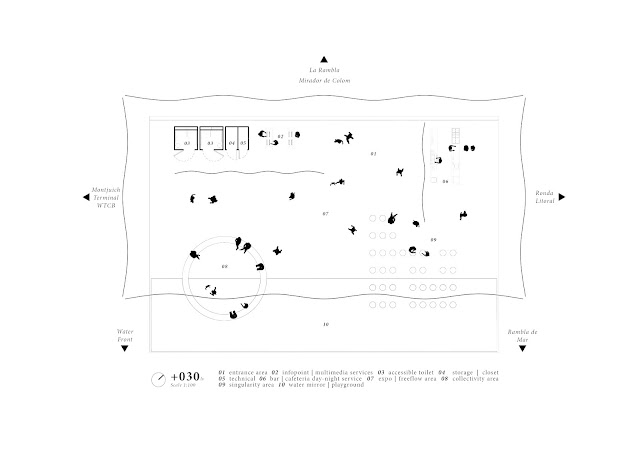 Now the ground wants to clearly translate, almost literally, the duality of land and water in a physical, controlled and clear form. Following the brief’s maximum areal dimensions, a temporary rectangular platform is installed on the dark, heavy ground floor. It is divided in three parts | sections, of which one third –towards the sea- is dedicated to the materialization of the water concept, translating it into a water mirror that became both a playground and a device that remove –visually- the distance from the sea’s water. The remaining two thirds are dedicated to the free flow concept and, of course, to the exhibition area. Since it wants to juxtaposing with the original floor, the platform is raised 30 cm from it. That strategy allows to hide all the technical “issues” under the platform, minimizing their impact.
The collectivity | singularity concept it is, at last, materialized into functional elements that acts like two different tools of aggregation, a sort of lexicon understandable only experiencing it. For this reason the collectivity translate itself into a circular, continuous ring bench, positioned in between earth and water. With this tool the people can met each other in a common, pleasant place. The singularity acts the same way, but translating itself into singular seats they becomes an intimate manner of stay in a place. The seats are also tables: they can be lifted up from the platform when necessary, blocked and used. At the end they can be unblocked and lowered to their original role of seats. In this action they found their singularity character, linked to the will of a particular user.

The rest of the functional program follow the same concept, but it approach the city side of the pavilion. Three small blocks, coated with satin stainless steel, detect two accessible toilets and one storage | technical box. A multimedia info point -with a devices recharge system and internet connection- and an outdoor cafeteria | bar countertops, are coated with the same satin steel. They are the last two pair of functional elements of the pavilion, acting like others attractors for the people from all over the location, making the whole pavilion character even more interactive.