Design concept
CRETTO is the new Tirana station, a layered machine consisting of urban and natural paths, which defines new interstitial spaces, canyon, different size and altitude squares. The barycentre develops a huge space at the borderline between urbanized and natural from which two towers stands and on which the five teeth that
are CRETTO look.
A functional aggregation laboratory mixing receptive, commercial and directional functions together with a
fully-­‐developed mobility system: Mobilicity is linked to the center and the northern of Tirane, to the airport and Duress by railway lines, tram, road, bike and pedestrian lanes.
Mobilicity offers parkingareas, car and bike sharing and thus it plays in a contemporary way the role of a modern city central station.

Diagram analysis
Starting from the early twentieth century, Tirane has been affected by an increasingly urban rising. The so called urban sprawl condemned the city to green areas reduction and excessive country consumption creating a dependence on cars due to the higher distance from facilities,
work and public transportations. Overall, the urban sprawl was enhanced by the lack of infrastructures, alternative mobility as bike lanes, car sharing services, sidewalks or properly interconnected crosswalks.
This was leaving the city at the mercy of an uncontrolled settlement saturation.
Once aware of the emergency, the public administration hardly tried to face the problem patching the urban tissue: the attempt to deal with the different issues all over the city started in
primis from the northern area. Among all the consulted experts, the Grimshaw Architects studio won the first prize, thanks to the design of new interconnections between the urban center and the Pasqukan park together with the project of a deep green area east bounded with the newborn railway station.
This is the vision of the project. The park designed by Grimshaw Architects hardly creeps into  the project area breaking the station nucleus into five teeth, which represent the new urban station.
This is not a unique buildings living the rupture between the façade of the city center and the binaries one; it is a complex organism able to address the different flows coming from the outback and always interacting with the green ipogea square which takes inside the power to hold and spread different functions. Starting point of the project is the reorganization of both the infrastructure and the transport system.
Through a south-­‐east traffic roundabout, in which SH2 and E762 converge, the traffic from the
hinterland to the city center has been filtered. 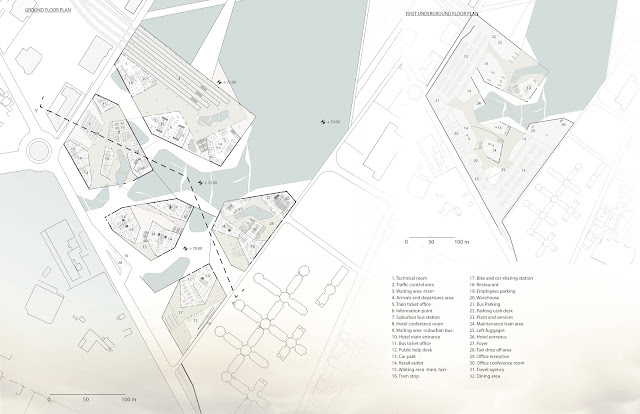 Functional Diagram
The project also provides two huge parks and ride areas underling the intermodal hub project vision: the idea is to avoid the access to the city center with its own car to stimulate the use of alternative mobility methods such as bike-­‐car sharing and tram. Concerning the railway line, the designed station is a terminus station that is turned into a pedestrian and tram path moving from the project area to the city center.