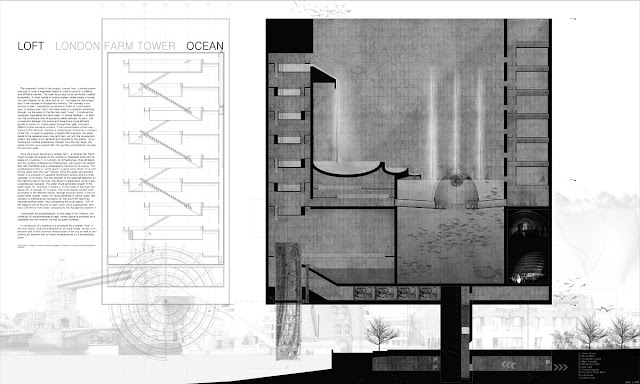 The approach found in this project, come from a strong under-standing of what a vegetable needs in order to grow in a healthy ad efficient manner. The main focus lays on an artificially created ecosystem, in other words a looping system  where waste is turned into raw material for an other and so on. The basis far this project lays in the concept of Aquaponics farming. The concept is extremely simple: vegetables are placed in holes of a perforated tube, in these pipes "dirty" fish-tank gets "used", it holds all the necessary ingredients the plant need -a natural fertilizer!-, in addition the continous flow of eutrophic water reduces - to zero- the competition between the plants and therefore a more efficient growth is called for. Fishes egest through their gills, Amonium (NH4+) is their excretory product. If the concentration of this substance in the fish tank reaches a certain level it becomes a menace to the fish. In order to guaranty a healthy fish breeding, the water needs to be replaced every now and then, yet with the Aquaponics system the water is not replaced but recycled by the plants. 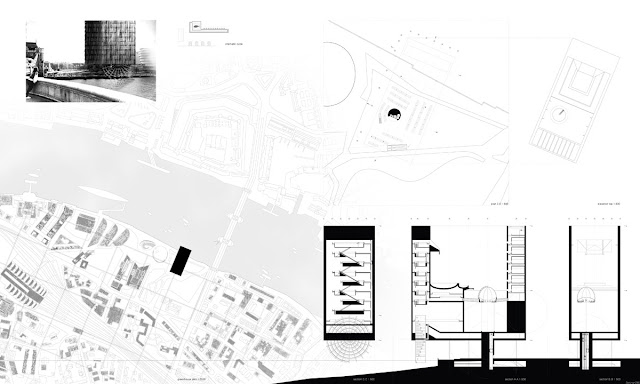 By extracting the nutritive substances from the fish water, the plants function as a natural filter that purifies and therefore recycles the fish tank water. Thus the project becomes a vertical farm - a Vertical Fish Farm! Green houses are places on the rooftop ar integrated within the facades of x building / 1/ in London. An infrastructure, that will blend with the existing underground infrastructure, will nourish the vegetables with FishWater and is subsequently returned to its source. The parallelepiped hides a "world apart": a spiral water wheel /2/ is collecting water from the river Thames. Once the water has reached inside, it is screwed /3/ upwards (Achimed's screw) where a main cascade /4/ is found, thus the strength to the waterfall depends on a spectacular cascade. The water chute generates oxygen in the water basin /5/ , and thus, it cleans it.  In the midst of the main fish space /6/, a capsule /7/ is found. This is the quality control room, according to the different needs, through pressure alone, it can be pulled down deeper-water will never penetrate it! Above water, the scenario is intensified by fountains /8/ that spurt the returning, naturally purified by water, thus completing the cycle, yet a classical fish farm loses 200 times more water compared to the Aquaponics system*). underneath the parallelepiped, on the edge of the Thames, the continuity of the promenade is kept, further space is provided for a vegetable and fish market, as well as public facilities.  In conclusion, this building is a prototype for a system, that, in the near future, could be implanted on an urban scale. Its aim is to become part of the common infrastructure of the city as well as becoming an element that will have consequences on a architectural scale. ­
* KUNZ, Martina : "Aquaponic- Innovative Fishzucht im Berggebiet"; Hochschuke for Life science and Facility Management, Wadenswill
Pubblicato da AWR Staff a 09:52