Our main approach to this program was to try to understand how a building of this kind can relate to the city, specially when it's standing in a central and privileged part of it such as the current one, and how  such structures can improve the space not only of the direct surroundings, but also of  city as a hole. 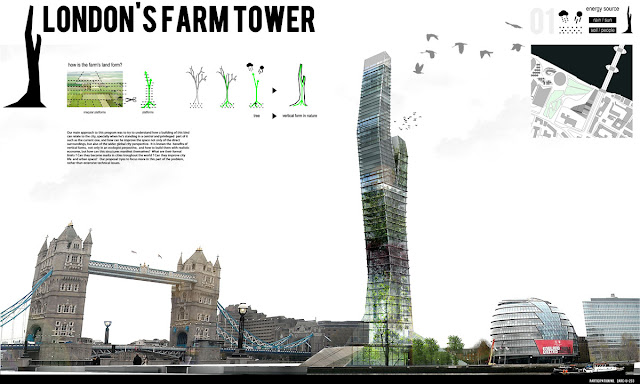 How can these structures manifest themselves? What are their formal limits? Can they become marks in cities throughout the world? Can they improve city life and urban space? Our proposal tries to focus more in this part of the problem, rather than extensive technical issues. \line\line The building imports the same formal logic of a tree. Firmly arising from a single core, it divides itself in two. In the North branch as a residential structure, opening view to the city of London, and on the south as a suspended garden, in a continuum with the vertical farm. 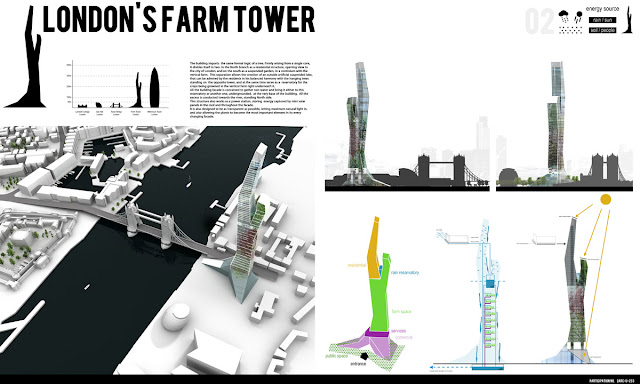 This separation allows the creation of an outside artificial suspended lake, that can be admired by the residents in his balanced harmony with the hanging trees standing on the opposite tower, and at the same time serve as a reservatory  for the crops being growned in the vertical farm right underneath it. \line All the building facades are conceived to retain the biggest possible amount of rain water. As they hit the glass windows, the rain drops glide down into pipes and then conducted to the upper  reservatory or under grounded one, at the very base of the building. All the excess is conducted towards the Thames river, standing North side. \line\pard The transparency of the structure allows for natural light to reach the growing crops, making them also the main element of this ever changing, mutable facade composition. Transparent photovoltaic cells are disseminated through all the roof tops in order to generate energy. With the use of computer scripted programs these roof panels are constantly aligning themselves in order to capture the maximum sun radiation possible.
Pubblicato da AWR Staff a 02:51