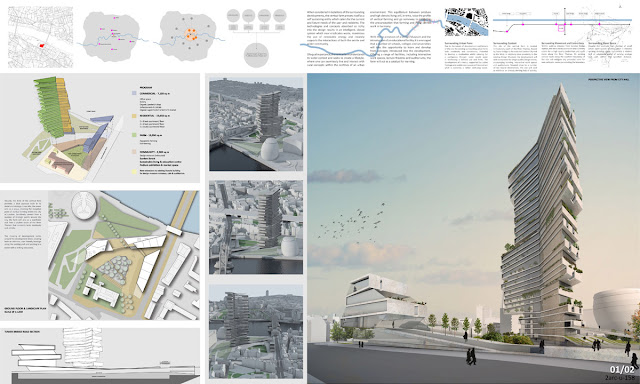 London City Farm - Rural agriculture meets urban living
Vision – To create a self-sustaining working farm in the heart of a leading Global City.
Located immediately south of the River Thames and bound by Tower Bridge to the east and London City Hall to the West, London City Farm (LCF) is perfectly situated to not only act as a self-sustaining working farm, whose technologies and concepts result in an intelligent, closed system which near eradicates waste, maximises the use of renewable energy and supports the interactions of both the onsite and wider community, but also seeks to raise the profile of such farming techniques, potentially acting as a catalyst for other likeminded projects not only within London, UK, Europe but also internationally.
Reacting to the lack of continuity and consistency surrounding the site area, LCF development identified a dual purpose – developing a destination attraction and reinforcing the contiguous route along the River Thames. As such LCF’s development was guided by the creation of a perimeter block. In developing such a block, the building was able to form relationships with all the key surrounding developments and landmarks, including London City Hall, Tower Bridge and the River Thames. The development of such a bold nexus supported by active frontage along the River and usable open spaces within and adjacent to LCF reconstructs what was previously a rather confusing, weak space. The various “interactive” components onsite creates a hub activity for a number of various users. Such opportunities include a farmers market, educational facilities, retail provision, re provided Design Museum and a tourist information centre.
The design is driven by the idea of a continuous free-flowing ribbon which attempts to thread the site together, while simulating the ‘ribbon-like’ nature of the Thames River. 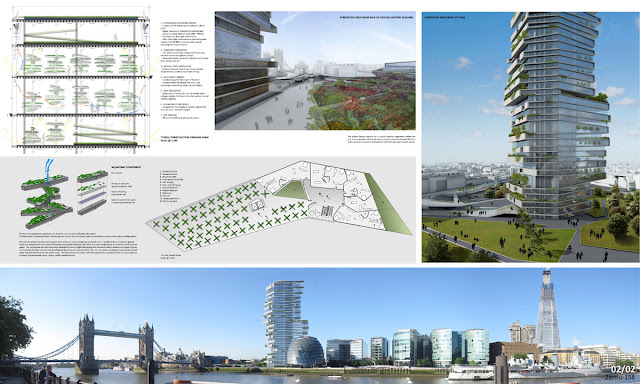 At ground level the ribbon forms a podium landscape which responds to site by level adjustments, framing pedestrian routes and views, and organising commercial functions. The podium houses the services and back of house farming activities such as seed sorting, laboratories and assembly spaces.  From off the podium the ribbon continues, escalating in height and form to culminate in a vertical tower, which houses an integration of rural farming and urban living.  The ribbon forms the floor plates of the tower and is expressed in the facade.  The tower element of the scheme appears as a slender, light and delicate element, situated in a strategic position of the site.  The orientation and location of the tower takes advantage of the sun path and allows views to penetrate through the depth of the site.  From across the river, the tower strikes a relationship with the existing architecture of the ‘city skyline’, while approaching from Tower Bridge, the ribbon opens up to create a ‘culminating point and sense of arrival’ for pedestrians.
The internal environmental conditions of the farm tower were of great consideration in the design process, in order to provide a controlled, while flexible environment for non-seasonal farming.  One particular aspect was the lighting conditions.  We wanted to avoid the use of artificial light, but at the same time recognised the need for uniform lighting across all areas of the farm.  In response, the tower is designed with double/ triple height spaces and a narrow floor plate to maximise the use of natural light and ensure light penetrates the whole depth of the plan.  Furthermore, the external envelop constitutes an ETFE double skin which improves light emissions penetrating into the building and enhances the effective U-Value.
Aquaponic methods are primarily used in the farming strategy, with the advantage of farming vertically on each floor while avoiding the use of soil.  This tried and tested technique allows for a closed system in which fish provide the nutrients to supply nutrient rich water to crops.  This process eliminates the need for continuous chemical or nutrient input which makes farming far more simple and clean.
Ultimately, the formal approach on LCF evokes a two-fold experience. From afar, the tower acts as a landmark and suggests the inception of vertical farming within the City of London. Sensitively viewed from a number of strategic locations around the city the farm becomes a prominent feature in the urban fabric, concurrently livening the skyline south of the River Thames. More closely, LCF’s massing varies around the development block creating intimate, user friendly spaces and frontages, peaking to the tower in the form of a striking crescendo. 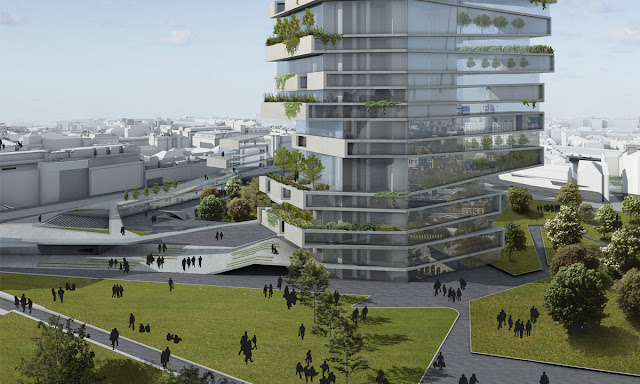