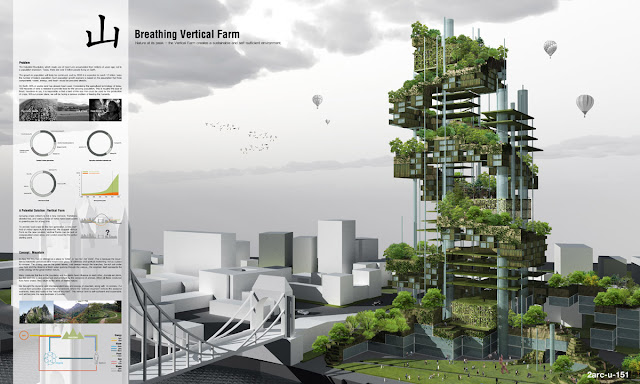 Nature at its peak - the Vertical Farm creates a sustainable and self-sufficient environment.  As a form of new infrastructure, the Vertical Farm will allow people to create a sustainable and self-sufficient city.
Problem: The Industrial Revolution, which made use of fossil fuels accumulated from millions of years ago, led to a population explosion. Today, there are over 6 billion people living on Earth.
The growth in population will likely be continued, and by 2050 it is expected to reach 12 billion, twice the number of today's population. Such population growth scenario is based on the assumption that three components -water, energy, and food- would be provided steadily.
On Earth, 80% of arable land has already been used. Considering the agricultural technology of today, 109 hectares of land is needed to provide food for the growing population. This is roughly the size of Brazil. Needless to say, it is impossible to find a land of this size that could be used for the production of crops. Without proper plans, we will be facing a serious problem of feeding the humanity.
A Potential Solution : Vertical Farm
Growing crops indoors is not a new concept. Tomatoes, strawberries, and various kinds of herbs have been grown in greenhouses for a long time.
To provide food crops for the next generation, a new method of indoor agriculture is essential. We suggest Vertical Farm as the new solution. Vertical Farms can be built at overpopulated urban areas, and London would be the perfect starting point.
Concept :산(mountain)
In Asia, the mountain is referred as a place to "enter", or "go into", not "climb". This is because the mountain is historically perceived as a respectable place of calmness and spiritual awakening, not as a place to conquer. The shining rays on the green leaves, cool breeze through the branches, the rich soil under your foot, and the streams of fresh water gushing through the valleys... the mountain itself represents the entire energy of the great mother nature.
Many creatures that live in the mountains, and the plants have influence on each other. Animals eat plants, but the plant life is also preserved and enriched by the presence of animals. When all these creatures' lives have ended, they return to the arms of mother nature.
We brought the dynamic and interdependent lives and energy of mountain, along with its scenery. Our vertical farm provides a sustainable environment, where the "artificial mountain" reflects the seasonal sceneries, trees and rocks of the "natural mountain". This vertical farm is self-sufficient and sustainable, and will become the new landmark of London.
System
Aside from the Farm, majority of the spaces is allotted to residential units and commercial units. Also, there are orchards and gardens for fruits and vegetables.
On the first floor is the Farmer's market where freshly grown crops can be sold and purchased directly. Crops to be transported to the downtown London will be transported through the pier.
This vertical farm has a sewerage system, hydroponic farm, purification and recycling system for used water. The wind power provides energy for the farms. It also has a methane processing system and bio-waste storage unit. All in all, not only does it consider the usage of spaces, but it also emphasizes the environmental aspects. It recycles and regenerates resources and energy, making it possible to sustain both the Vertical Farm and the city of London.
- solar energy system _ Solar gel
The BIPV(Building Integrated Photovoltaic) technology uses the solar cell modules to construct the outer skin of the structure. This technique uses transparent films instead of the non-transparent cells, and allows for the generation of solar energy on the outer skin.
Just as the leaves change their color seasonally, Solar-gel changes color depending on the temperature of solar rays, creating kaleidoscopic facade of color changes.
- Wind energy system _ Wind belt power generator
The Wind belt power system generates energy by the wind-vibrating belt. It is capable of producing 1.1kW of electricity and can be installed on railings.
- Tube system
1. The Tube system is derived from the transpiration mechanism of plants. Tube system draws water from the Thames and the sub-surface. The used water that has been purified returns to the ground, and then is drawn back up again.
2. The system does not only provide water system, but it also governs the ventilation system and reflects light from the outside to be used indoors.
3. As the structure-supporting frame, the tube can also transport cables, elevator, and water pipes. 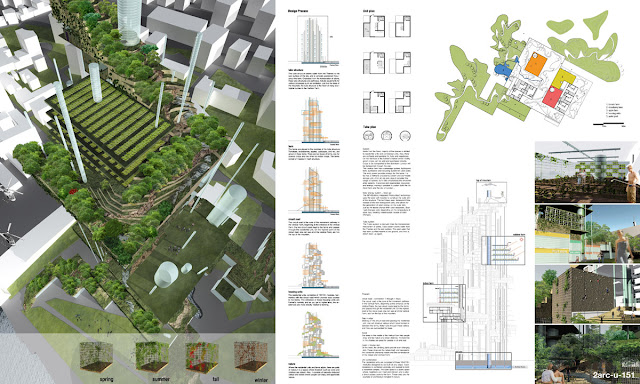 Program
- circuit road : connection + through + flows
The circuit road is the core of the movement pathway in the Vertical Farm. Beginning at the entrance of the Vertical Farm, the two circuit roads lead to the farms and passes through the residential unit. On the highest point of the circuit road, one can see all of the Vertical Farm, as if on the top of the mountain.
- valley : Gap + edge
Walking on the circuit road and passing the residential unit, one will observe valleys which have formed in between the farms. Water runs through these valleys and they are surrounded by trees.
- forest
The forest in the middle of the Vertical Farm lets people enjoy and feel nature at a closer distance. The benches in the shades are great for people to sit and rest.
- mesh + Double skin
On the mesh, the climbing plants provide ever-changing skin. These vines are the nature itself, and represents the constantly changing nature and the co-existance of the nature and Vertical Farm.
- Unit combination
The residential units are consisted of three 10mX10m modules designed to be built at any slope. Each residence is combined vertically and layered to form a residential complex. The Open Space is a public space where neighbors can meet and interact, and is also a direct access point to the farm. These units are the example of architecture mingled in nature. 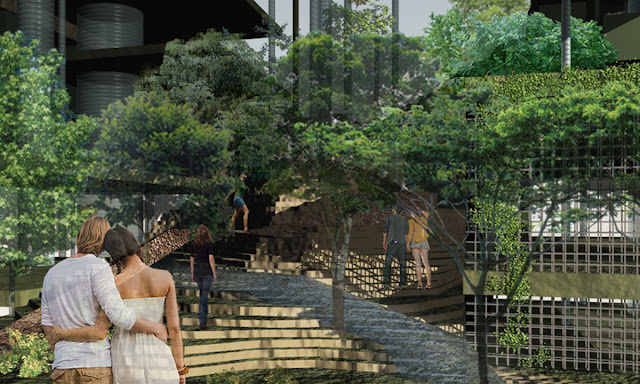