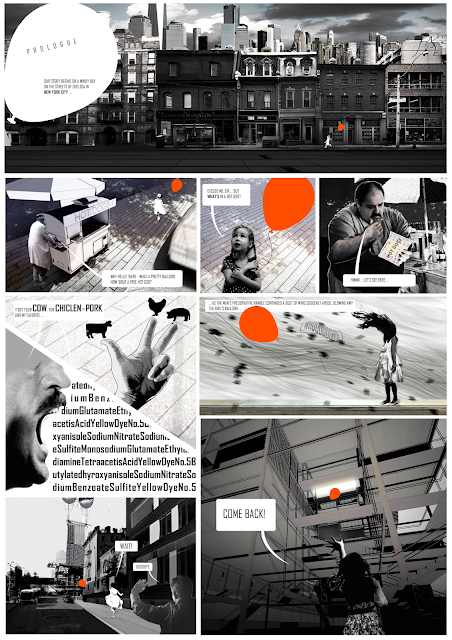 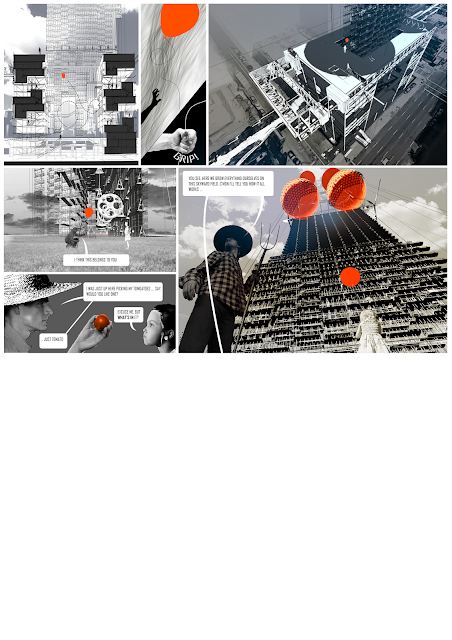 The organism is complex: born of man, serving nature, subjugating nature. It is a dichotomy of agrarian and industrial - of old ways and new technologies. It is the homestead and the factory, sited on worn grounds and new frontiers. The vertical farm defines an altogether new way of life, a culture that is not easily reconciled with the schemas of our society and as such creates the illusion of contradiction and confusion. The education and installment of a new society of urban agronomists, with a currently inaccessible understanding of a deep, cultural and spiritual commitment to ecology is perhaps the greatest challenge facing agriculture in an urban environment. The vital movement towards the production of sustenance in our cities is by its nature radical … and in order to be embraced, it must turn our culture on its ear. 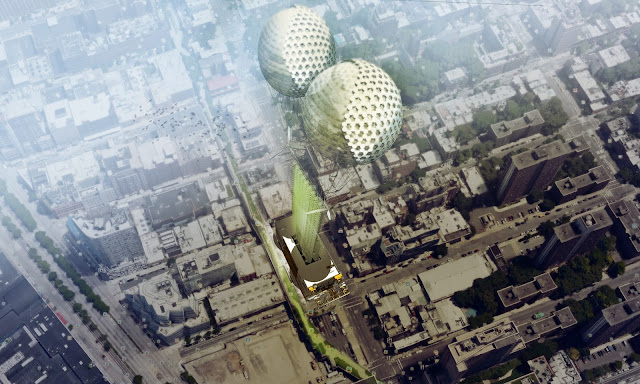 It is the urban farm’s necessarily unorthodox mindset which leads us to the most radical, yet rewarding of schemes. New York, the city of towers has been pursing verticality for over a century. It was here that the first elevators were installed, where the steel-frame skyscraper was pioneered and brought to new heights. In this place that reaches the sky
we continue to challenge the occupant’s orientation to the ground plane. We have taken the farm and the field and turned it skyward; it becomes the literal connection between earth and heavens, as New York truly becomes oriented vertically. Our ephemeral fields are kinetic looms of vegetation, held aloft by buoyant dirigibles in the atmosphere. Urban agriculture is liberated of the dimness and grime of the street-level city, and opened up to light and air. It is the deployable hanging garden, an icon and a park of an entirely different experience, the new lungs of the city. It adds new dimension to the natural aspect of the city by adding a vertical axis to the highline viaduct, opening the possibility for greenery and agricultural growth in three-dimensional space. We envision
the vertical field as a set of movable and re-configurable parts. These may be re-oriented to grow different crops, hangared in the building’s atrium for winter, or set aloft at


a separate location until ready for harvest. While this kinetic field is woven into the permanent structure of the building it provides a sort of urban theatre within the void of the open atrium, allowing another enthralling experience along the highline path. The high- line and street levels are interconnected and programmed with an open market that allows for social interactions and the sale of produce to the local population. 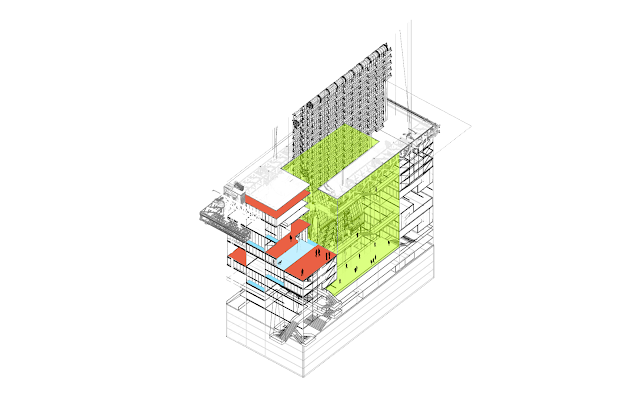 The residencies in the two wings of the building are interconnected by a doubly-helical path, punctuated by communal gardens which are each meant to accommodate 3-4 units. With the addition of balconies to each unit, the act of growing as prescribed by the provided spaces, becomes a socially-scalable event. There exists the private or individual garden at the scale of the household’s balcony, the communal garden, at the scale of the terrace which is shared and maintained by several households, and the public farm, which is main- tained by the entire building and provides food for the local urban population. These are functional, yet social spaces, all intertwined with the intent of supporting a culture ca- pable of the deep ecological values needed for the venture of urban farming. 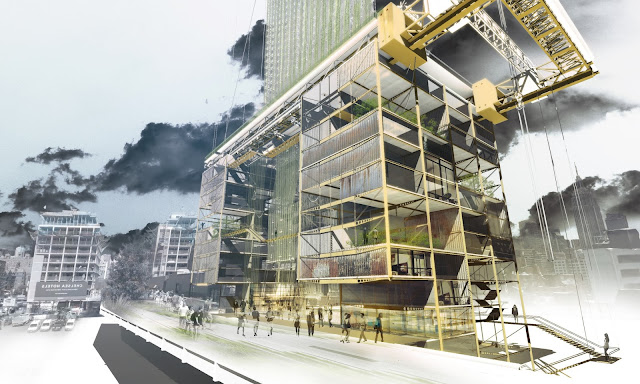 We propose a program that produces food in proportion to healthy human diet, using a local labor population which in term consumes the produce.      This ensures a high quality of crops and a meaningful connection to the ingredient. A culture has the opportunity to thrive and mature around this mutual endeavor to provide, and the sharing of labor’s rewards. New jobs are created, and a popilation is educated about their own livelihood ad well was the greater environment's. The culmination of these practices is an architectural organism that stands as an icon in the city. It is an urban event, a metropolitan asset, and an object of progress.

The vertical farm employs a variety of technological innovations aimed at sustainability and productivity. High-altitude balloons sheathed with screens for moisture harvesting are an artificial raincloud, returning water to the farm via a drip-line. Using stored electri- cal power from photovoltaic arrays this water can be split via electrolysis into hydrogen and oxygen. Like an inverted lung, the farm vents oxygen into the carbon-rich city. The hy- drogen is used to inflate dirigibles that hold the farm aloft. Windmills continually rotate the farming system, ensuring all crops are equally exposed to light, and allowing the field to be used as its own water lift for irrigation. As the farm passes into the atrium, crops are harvested and the growing medium is replenished and re-sown in a giant loom-like appa- ratus. All of these systems are made lightweight and mobile through material and structural innovations, such as the use of lightweight composites and alloys. In the colder months it is intended that the vertical structure is stored within the building’s atrium and used for greenhouse growing as durable plastic drop sheets are used to enclose the void, and trap solar radiation (this serves the double-purpose of creating an insulated air-void around the heated residences). All organisms in the farm are selected as part of a sustainable ecological web that can operate as a closed loop, or aid in the support of other endemic species, supporting and enhancing the biodiversity of the island, and extending the mission of the highline. 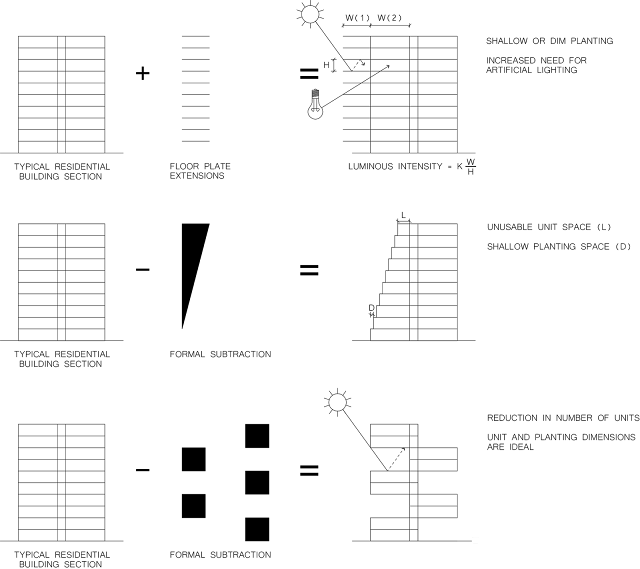 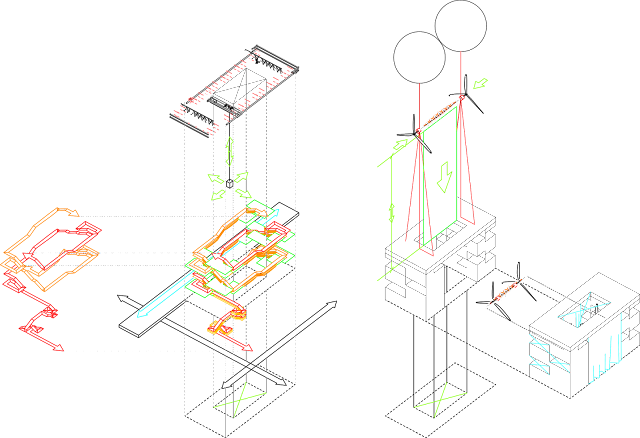 Our proposal not only allows for a radical alteration of the Chelsea neighborhood, but also envisions a flexible and deployable system, reconfigurable for a variety of environments and circumstances. The production of food in our urban centers is a vital step towards the sustainable city that may be realized only through the mass deployment of these practic-
es and infrastructures. The adaptability of this scheme is paramount to its implementation and the general proliferation of vertical, urban farming. We see this model as an archetype that establishes a timeline, one which matures with a new urban skyline of filled with sus- tainable agrarian-urbanity, with skyward fields of green. 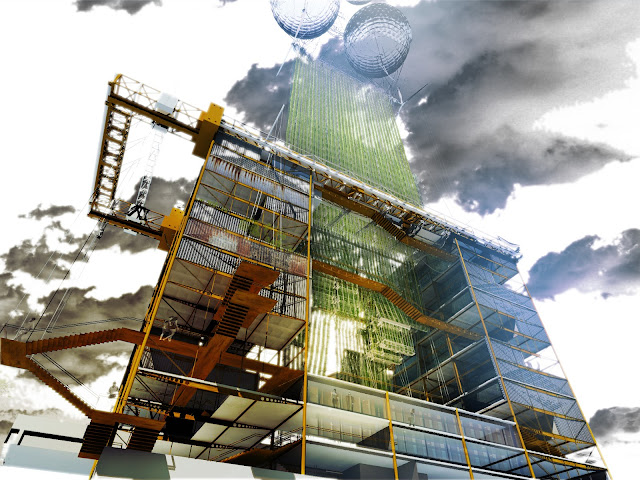