FUZZ.BOX
harnessing the power of the in-between

Fuzz.Box utilizes a revolutionary system of energy collection that can power the entire Borneo-Sporenburg neighborhood. The environment of Amsterdam is particularly well-suited for wind-based sustainable energy. With an average constant wind speed of 23 kilometers, wind energy is readily and constantly available. Fuzz.Box is a series of interstitial wind tunnels covered in piezoelectric fibers. Piezoelectric fiber technology is currently only used in small-scale energy harvesting applications, such as fibers within clothing. Piezoelectric fibers convert mechanical and kinetic energy to electricity. The piezoelectric fibers covering the Fuzz.Box generate energy from their swaying back and forth in the wind. Each fiber can generate up to a watt of energy a day. Moreover, the formal configuration in plan and section create a series of wind tunnels, based on the venturi effect. The venturi effect is the phenomenon whereby pressure -- and thereby wind speed -- is increased with decreased container volume. The scoops and contractions within plan and section that give the Fuzz.Box its faceted appearance increase wind speed to increase energy production. The more the fibers move, the more electricity is created.  With a total of 5,610,000 fibers covering the surface of the building, Fuzz.Box generates 2244kWh of energy a day, or enough energy for sixty-four houses. 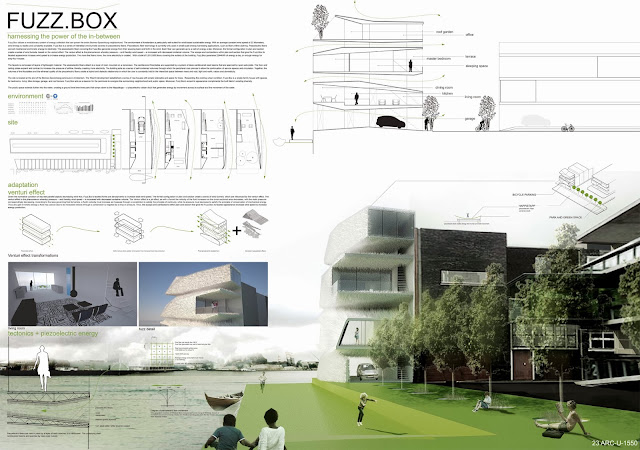 The façade is composed of layers of lightweight material. The piezoelectric fibers attach to a layer of resin mounted on a rainscreen. The cantilevered floorplates are supported by a system of deep cantilevered steel beams that are spanned by open-web joists. The floor and ceiling plates expand and contract to increase the pressure of airflow, thereby creating more electricity. The building acts as a series of self-contained volumes through which the peripheral core pierces to allow the continuation of service spaces and circulation. Together, the volumes of the floorplates and the ethereal quality of the piezoelectric fibers create a hybrid and dialectic relationship in which the user is constantly held in the interstitial space between mass and void, light and earth, nature and domesticity.
The site is located at the end of the Borneo-Sporenberg peninsula in Amsterdam. The West 8 development established a series of row-houses with ample sidewalks and space for trees.  Respecting the existing urban condition, Fuzz.Box is a single-family house with spaces for bedrooms, living, bike storage, garage, and roof terrace. Fuzz.Box acts as a beacon for the peninsula to energize the surrounding neighborhood and public space. Moreover, Fuzz.Box’s eccentric appearance compliments the built fabric’s existing diversity.
The public space extends further into the water, creating a ground level tree-lined park that ramps down to the Happistapp -- a piezoelectric rubber dock that generates energy by movement across its surface and the movement of the water.
Pubblicato da AWR Staff a 12:45