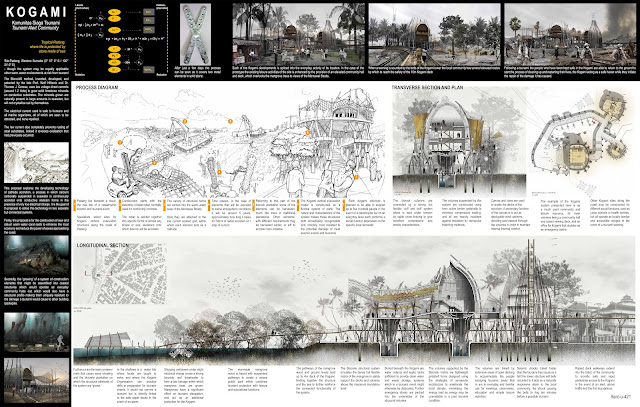 Water supports life in all its many forms, but its power to create is equalled at times by its power to destroy. Tsunami can overwhelm even the most enormous of civil engineered defences, and due to their great expense much of the world’s vulnerable coastline communities do not even have the benefit of these.

The catastrophe of the 2011 Japanese Tsunami revealed that even massive civil engineering projects could prove impotent against such powerful natural events redoubled the intent to research other possibly more effective strategies which might grow out of natural systems, operating on the basis of an incremental decrease in incident wave power over the simple expedient of building massive walls.
This proposal attempts to provide an effective strategy of tsunami amelioration, which also supports the diminishing warm water reef ecosystems, and which provides the very materials that might be required to construct economically affordable and effective refuges for the vulnerable coastal communities without the economic resources to construct traditional defences.
The prototype scheme is situated in the Sumatran City of Padang, where the occurrence of a massive tsunami is sadly a question of when, and not if.

The project explores the developing technology of cathode accretion, a process in which calcium carbonate suspended in seawater is continuously accreted onto ferrous skeleton forms in the presence of very low electrical charge.

It is proposed to utilise this technology in two separate but connected systems; the construction of new and robust warm water coral reefs to enhance the local economy and reduce the power of waves approaching the coast; and the ‘growing’ of a system of construction elements that might be assembled into coastal structures which would operate as everyday community hubs, but which would also have a structural profile making them uniquely resistant to the damage a tsunami would cause other building typologies.
Using forms derived from naturally robust ecologies, principally mangrove forests and warm water corals, as well as drawing on the effective vernacular strategies developed over the centuries to modify the environment for human comfort, the new typology is designed to be locally designed, manufactured, assembled and maintained.

The project can be characterised as development of new technologies suited to their environmental and social context, and not the uneconomical imposition of high technology. It is from these premises that the manifesto of key drivers came to be defined that directed the development of this scheme.
In Padang, significant resources have been directed toward preparing for tsunami. One local organisation involved is Kogami, the “Komunitas Siaga Tsunami Alert Community”. Presently working on a tiny budget, Kogami focus on education and drills for the local population. It has been central to this proposal that their invaluable work is embedded throughout the scheme to provide the coastal population with the best possible chance of survival when the tsunami eventually occurs.