AWP, a Paris-based architecture firm, was named in July the general contractor for the landscaping of the public spaces and follies situated at the foot of the Grande Arche. The site, located near the future Arena 92 in the Jardins de l’Arche neighborhood, serves as a space for genuine interchange between La Défense and Seine-Arche. The urbanists at AWP are equally responsible for a guide plan for Defacto that will enhance the urban space of La Défense’s business district. More images and architects’ description after the break.
The project site is of a great spatial complexity. Underground are the A14 route, metro line 1 and the RER A, while, above ground, the exisiting Jardins de l’Arche landscape project and the Jetty occupy the space. It should be able to serve the upcoming urban planning changes to the neighborhood: Terrasses de Nanterre, the Arena 92 stadium, residences and hotels.

Each element of the Jardins de l’Arche project, which covers approximately 30,000 m2 and includes a ramp nearly 600 m long, contributes to an improved urban experience. The continuous and fluid ramp allows for a more fluid space, while the extensive garden encourages a re-thinking of the existing landscape as a “sanctuary” to be protected. The new follies and multipurpose spaces and small scale buildings, meanwhile, increase and “activate” the possible uses of the site. The principal objective is to create an architectural, urban and landscape continuity between the newly developed spaces and the existing urban spaces. Central to the project are the following goals: recreate an exceptional urban existence on a neglected site between the Terrasses of Seine-Arche and La Défense; create an attractive and lively space on the scale of the Parisian metropolis; achieve an urban culture and communication between La Défense and the surrounding neighborhoods; reinforce the ties between the area and the heart of the city by rendering the space more fluid; reveal and give new value to the buildings’ architecture in a harmonious urban landscape. This is one of the Grand Paris’s major public urban spaces; it will create a link between two sections of the Seine by asserting its presence at the mid-point. This idea takes priority over all of the private and local constraints of the space, and perhaps even influence the way those constraints are addressed. We’ve approached the site by feeling it out in its nocturnal aspect, searching for a new intensity of landscape to take on the role of a key image for the Grand Paris. We approach this project with the ambition one would have for a “place de l’Opéra”: Arena 92 is a new type of concert hall. 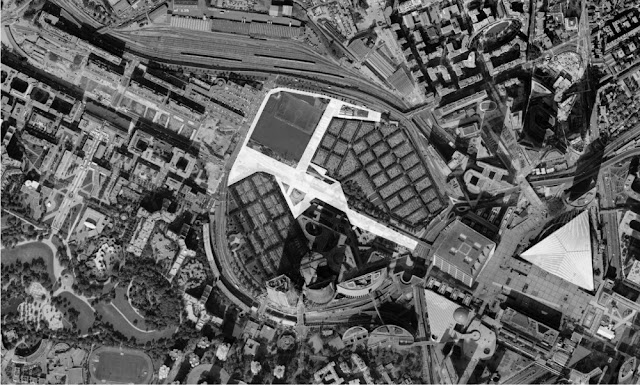 This site is nonetheless full of constraints, by its exiguity, by the presence almost onsite of two signed works that constitute French heritage (Gilles Clément, Paul Chemetoff & Marc Mimram) , and by then sheer maximum expected size of crowds. A part of the design then may be “virtual,” as something luminous, sensitive, interactive, temporary. Our vision at this stage of the process consists in developing, as the major point, spatial continuity with as few separate elements as possible (3): a large, contemporary plaza; flux zones that highlight the Jetty and the Jardin de l’Arche ; and a common vocabulary repeated in different situations, such as a stylistic process that will ensure accessibility, or spatial and temporal modularity (kiosks, follies). This spatial continuity is the provison for the harmonious and stimulating integration of numerous small urban objects, for which the project calls.
www.atelieroslo.no
www.archdaily.com
Pubblicato da AWR Staff a 05:52